skip to main | skip to sidebar

Update 1st May 2010
Fly Fishing Nation
"All over our beloved planet earth, even on the most remote places one may possibly be able to get to, chances are, that there will be somebody flyfishing. Fact is, that it is such highly spirited flyfishing individuals who are instrumental in pioneering pristine places such as Tierra Del Fuego (Argentina), Khalovka (Russia), or New Caledonia (Australia), to name a few.

(Silver Ghost - Carribean Sea - S.Dombaj)
Thanks to the enormous drive and the almost on madness bordering dedication these guys sport, it is, that the formerly white spots on our maps have turned into the most desirable places to go for enjoying the great sport of flyfishing. These pioneering sportsman and women are the living proof, that for the kind of flyfisher we are talking about here, there is no place too far, no wind to strong and no waters to rough, to take a flyrod just there and even beyond, so god will.

Curious?
Well, then let´s go and catch some of our spirit by the way of a photo journey around the world ... Witness flyfishing-freaks going beyond borders and obstacles. Be part of the experience when people of different countries go for their goal:
The often seemingly featuereless appearance of some of the most remote locations on this planet, reveal their secrets and hidden treasures often only to the eyes of the spirited flyfisher."

Fish Of The Month 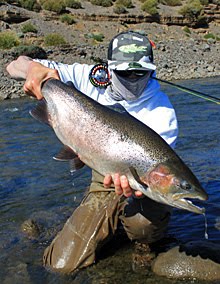